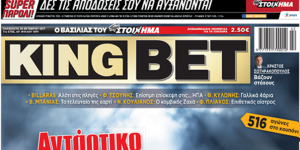 According to the latest release, “KING BET” since August 2007 and over 5 months has managed to make five times its circulation. “PRESSBOX PUBLISHING”, which has been releasing the KING BET bi-weekly newspaper since March, announces that the newspaper just before its first year of circulation continues its upward trend in this particular category of newspapers, marking its August 2007 and a 5-month five-fold increase in circulation nationwide.